The very first thing to do for the vegan Stromboli recipe is to decide if you’re going to make your own pizza dough. I highly recommend making your own, as it is both super quick, easy, and delicious! You also don’t need to worry about any weird ingredients or preservatives in this dough, because you made it!

I also suggest using my vegan pizza dough recipe, because this vegan Stromboli recipe uses this exact recipe, and it turns out extra perfect each and every time. Give yourself an extra 30 minutes before making the vegan Stromboli filling to allow time to make the dough, let it rise, and roll it out.

At this point, start the marinara sauce. This is my favorite recipe! I like to start this at the very beginning of making a vegan stromboli. Therefore, the marinara sauce has ample time to cook & thicken, and will allow for the flavors to blend really well.

This marinara sauce recipe only requires a few ingredients! It is the perfect dipping sauce for this vegan Stromboli. Not only that, it also works perfect well as a pizza sauce. I use it whenever I make my cast iron skillet pizza!

Once the boiled broccoli and spinach are drained & cooled, transfer to a cutting board. Mince the mixture together completely until it is into very small bites.

After the mixture is chopped, add either minced garlic or roasted garlic, a touch of salt and pepper, and 1 tbsp. olive oil & mix well. Sometimes, adding some other seasonings like thyme, basil, and/or oregano, helps to enhance the flavor. If I’m not using any vegan meat, like vegan pepperoni, the extra seasonings add a desirable twist.

Other great meatless meat options for this recipe would be Field Roast Sausages, Beyond Meat Sausage, Meatless meat crumbles, or baked tofu. However, this recipe taste simply amazing with no vegan meat options, and with just the broccoli and spinach filling.

If you really are craving pepperoni though, you can easily order the Sweet Earth, Pepperoni Plant Based Planet

from amazon & get it delivered right to you!

I’ve said it a million times and I’ll say it a million more. Violife has hands down the best vegan cheeses for pizzas, calzones, & strombolis. I exclusively use their Violife, Shreds Just Like Mozzarella

First, preheat the oven to 425 Degrees F. Then, line a baking sheet with parchment paper.

After your fillings are made and gathered, grab your homemade pizza dough. Roll the dough out until it is about 1/4″ thick. You can either make one large Stromboli at this point, or divide the vegan dough in halves and make two separate Stromboli’s.

First, sprinkle on a little of the Violife, Shreds Just Like Mozzarella on the bottom in the center or the Vegan Stromboli dough. Then, top with your choice of vegan meats if you’re using. After that, take a few heaping spoonful’s of your broccoli & spinach mixture and spread down the center, making sure to leave about an inch of dough exposed on the top and bottom edge.

It doesn’t have to be perfect.

Then, you can top it off with a bit more vegan mozzarella if you’re feeling fancy.

Fold the Stromboli into a Pocket

Once the fillings are in, take the top and bottom of the dough, and stretch it over the filling. Then one side at a time, fold in towards eachother to create the pocket for your vegan Stromboli! It’s that easy. Then, place the vegan Stromboli, folded sides down, on the baking sheet.

At this point, what I enjoy doing is brushing a small amount of olive oil on top of the vegan Stromboli. Then, sprinkle a bit of Trader Joe’s Everything but the Bagel Sesame Seasoning

on top! Other great toppings could be a sprinkle of salt and pepper, sesame seeds, poppy seeds, or just plain!

Before baking, take some kitchen shears, and snip 5 equally spaced holed in the top of the Vegan Stromboli. This will help release steam, allow it to rise well, & it looks cute.

Pop this beauty into your oven, and bake anywhere from 25-35 minutes, depending on your oven. When the Stromboli is a deep golden brown, it’s ready!

Slice the vegan Stromboli in half on a diagonal, and serve alongside the vegan marinara sauce. 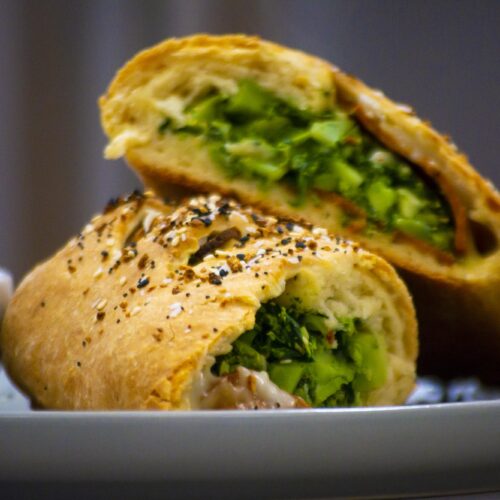 These nutrition facts are approximate and do not take into account any cheese or meat alternatives. HI! Thanks so much for visiting Vegan Robb. Some links to products contain affiliate links. If you make a purchase after clicking a link, I may receive a commission. This commission comes at no charge to you. In fact, you may be getting a discount.